The Last "Everybody Loves Raymond"

We watch re-runs of Everybody Loves Raymond, and The King of Queens around here.  We used to watch old movies too, but they keep moving our old movies channels to the premium packages.

I'm not proud of it, but I have not kept up with The Good Wife, Breaking Bad, Modern Family or Mad Men.  I know.  I should pick one.  I would have something to talk about, other than Armande Gamache, Billy Collins and Facebook.  (We do watch Downton Abbey, but that's only for a little while.)

I watched Everybody Loves Raymond when it was actually popular culture.  I will confess to having a sort of love/hate relationship with the show.  Some episodes have been painful.  Others have made me laugh so hard I cry.  (I especially like the one where Robert leaves home and goes to live with another couple -- who turn out to be exactly like his parents, Frank and Marie.)

Now we watch the re-runs.  We've been through a few revolutions of the entire series, which brings a certain perspective, especially when several episodes run in one evening.  One evening, we watched the final episode, immediately followed by the first episode.

Tonight the last episode of "Raymond" was on, again.  I think I know it by heart now.  It is all about how Raymond has to have adenoid surgery, but he is nervous about it.  He has always been a little bit of a hypochondriac.  However, in this episode, there is just the smallest tense moment at the end of the surgery.  Debra falls apart, briefly; Robert loses his "I hate my brother" facade long enough to volunteer to give blood.  Naturally, everything turns out all right.

It's a funny, but also sentimental episode; the brief brush with mortality reveals the love beneath the fighting, jokes and sarcasm.  Although everyone tries to keep Raymond from finding out about his brush with death, finally he finds out.  "You like me!" he accuses Debra. 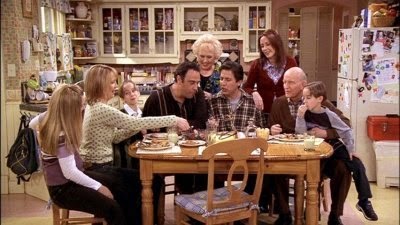 Then the next morning, the whole big dysfunctional family ends up squeezed around the kitchen table, eating chocolate pancakes.  The very last scene of the very last episode of Everybody Loves Raymond takes place around the table.  There is no big moment, except that a couple of people are saying, "pass the syrup" and Raymond says they need to get a bigger table.

It is not a bad ending, if you ask me:  everybody sitting around the table, all crowded around, eating together, being a family.  It is not a bad ending, but maybe I just think that because that is how I imagine the end of our story:  all of us feasting together, not on chocolate pancakes (but why not?) but on rich food and well-aged wines, on the mountain of the Lord.

We will know, finally, that we are loved.  And there will be enough.
Posted by Diane M. Roth at 9:22 PM

Maybe to know that you are loved IS enough. Wouldn't it be a hoot if everybody was so satisfied with love that we forgot about chocolate!?