The Holy Spirit on Sunday Morning

I'll be honest:  I was sort of worried about worship this Sunday.  I have been dealing with some neck and back pain of mysterious origin for the last month or so.  There are times when it doesn't bother me much, but there are times when I feel like the pain is draining all of the energy from me.  I put on a lidocaine patch and took pain medication and prayed for help from the Holy Spirit.

I put on the green stole that a member of my congregation made for me.  I have been wearing it for several weeks, but until this week, I had forgotten to mention anything to the members of the church. Today I boasted in the gift.

During the first song, some of the children came forward and played rhythm instruments, while the congregation sang "Lord, Reign In Me."  After that, a little girl stood in the center aisle and gave the Call to Worship while her grandmother recorded the moment.

For the children's message, I asked the children if they ever had to learn to do something that was hard.  Most of them didn't think that anything was hard for them (well, one little girl learned the meaning of a word that I couldn't even pronounce.)  I asked her what the word meant.  I'm not sure, but I think she said it meant 'thinking about thinking.'  Anyway, they were all scandalized that some of the disciples GAVE UP on following Jesus, because his teaching was too difficult.

"You should never give up," they said.

Then my sermon, and my aching back.  Somehow I thought there should be one more paragraph, but somehow the paragraph did not appear.

Then there was singing, and piano and the drum, and the xylorimba, and then we shared Holy Communion. 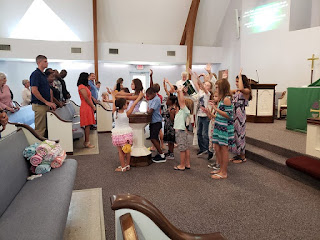 And then it happened.

Just as I was getting ready for the benediction, a woman from the congregation raised her hand, and said, "I need to say something. I have a prayer request."  She told us that she had just received a text message from one of her children, and that one of her grandchildren was being taken to the hospital, and that they were afraid.  And they would like us to pray.

So we did.  Before the benediction, we prayed together.  I invited people to come forward and surround her, and a few people came forward to lay hands on her.

It was a holy moment, and I was in awe.  Why did I worry about worship?  The Holy Spirit helps us in our weakness.  With sighs too deep for words.  With the hands and feet and voices of children.  We are the body of Christ.  We are children of God.  We pray for one another.

Still I wonder:  why did the children come?  What made them able to hear the call?  Was it because it was a child who needed prayer?  Was it because they have been encouraged to participate in other ways?  Was it the Holy Spirit, and they could hear better than we do?  As one person said to me later, "We are raising them better than ourselves."

All I know is this:  the children came.  The Holy Spirit showed up.  This is church.

Over the past few years, I have tried to take time to name ten blessings of the day.  I think that the idea is that I am supposed to do this every single day.  Sometimes I am pretty consistent; other times I have forgotten, often for days at a time.  However, I think that it's a simple, and potentially powerful thing:  just to take time to name ten blessings ever day.

I learned this practice from a member of my last parish.  Harriet was a retired airline executive who had traveled all over the world.  She was also the daughter of a minister who had grown up in a small town in Minnesota.  When I met her, she lived within a few blocks of the church, in a small house decorated with Norwegian Rosemaling.

Harriet once gave a moving Adult Forum on her travels, and how she found a place to worship no matter where she was in the world.  Her Forum was called "The communion of Saints."

I say that I learned this practice from Harriet, but it was not until near the end of her life that I learned it.  Fiercely independent, she found herself in a nursing home.  When I was planning to visit her with communion, her executor told me that Harriet had this faith practice.  Every day she named ten blessings.

"Make sure you remind her to do this when you go to visit her," she said.

So I did.  I got out my communion, and I went to visit Harriet at the nursing home where she didn't want to be.  We talked, we shared communion, and I asked her what her ten blessings would be that day.

When you are living in a nursing home, it's not so easy to find the blessings.  She had to think about it for a bit, and be creative, and resort to the simplest things, like being alive.  I remember that one of her blessings that day was a box of chocolate.

Ten blessings.  Every day.  I have never read about it in any book.  It's so simple.  Anyone can do it.  If you can count to ten, you can name ten blessings.

The Jesuits have a practice called "seeing God in all things."  Somehow I think this practice relates to that one.  There are times and places where it is easy to see God.  But in all things? How do you do that?  Start by naming ten blessings, wherever you find them.

A woman who lived close to my church lost her home to a fire.  We took up a collection to help her.  When I called her on the phone (I didn't know her personally), she said that the fire was, "the worst blessing."  I was taken aback.  She said the blessing was in the outpouring of care from her neighbors.  She saw God in all things, although I am not sure how she managed it.

When I think of Harriet's life, I think of the ways she was blessed.  She was a pastor's daughter from a small town, and she ended up traveling around the world.  But she never married, and I suspect sometimes she was lonely.  She had blessings and she had burdens.

But at her funeral I claimed the promise of the saints:  the promise that they have received more blessings than they can count, more than the stars they cannot see.  We can't hold that promise in our hand, but we can name ten blessings.

Last week I went to visit a shut-in couple, with communion.  I had heard that she was hospitalized while I was on vacation, and wanted to check in on both of them.

At the end of the communion service, I gave the traditional benediction, the one I know by heart:

"The Lord bless you and keep you.
the Lord make his face shine on you and be gracious to you.
the Lord look upon you with favor,
and give you Peace."

Afterwards, she said to me, "You know, whenever I hear those words, I feel calm and comforted. I don't know what it is."

I suppose I thought it was my job to say it, to complete the circle, to say another word, a final word.  We are on our way to the promised land, wherever that is.  I am not sorry I said it, but it sounded a little too glib, like I was trying to make a dissonant chord resolve.

But she told the truth, that we are in the wilderness, that we are not there yet.  She was the truer preacher, even though I suspect that her wilderness looks different than mine.  She worries about the floods and the fires, and thinks perhaps that we are in the End Times.  I worry about the floods and the fires, and I  think that we are abusing the earth, and wonder when we will repent and treat it as God's sacred creation rather than a commodity.  We are afraid of different things, I believe, but it is the same wilderness and we are wanderers.

All we really have, on the way, is the promise of the benediction, that the Lord blesses us and keeps us, that God's face shines on us and looks upon us with favor, that God gives us, in some strange way -- peace.  Peace in the wilderness.  Peace for the wilderness.  Peace even though we don't know where we are going.  Peace for the meantime.  Peace for mean times.  I worry that these are very mean times.  I'm sure she does too, but for different reasons.

For some reason, the benediction is enough.  The words do what they are supposed to do.  They give us what we need in the wilderness.  Because we do not live by bread alone.  We live by these words.  In the wilderness.  And we put them in our mouths, and they are sweet, and we live again another day.

When I lived in Japan as a missionary many years ago, I heard a lot of stories.  I heard stories of Japanese Christians, and how they came to faith.  Some of the stories were from the time immediately after Japan lost World War II.  It was a time when the Japanese people did a lot of soul-searching.

I heard one story about man who had been in the military during World War II.  I no longer remember his position, but I still remember the American pastor pointing to the pew where this man always sat, every single Sunday.  He threw away his Shinto "god-shelf" when he became a Christian.  He no longer venerated his ancestors as you were bound to do, as a good Japanese man.  He was all in.

What had finally convinced him of the truth of the Christian faith?

The Christian faith is a tiny minority in Japan.  All of the churches where I worshipped were small, just fifty or sixty people making a congregation.  Yet there was a witness of the good news in Japan, good news of great joy to all the people:  not just one country.

After three years of living and working in Japan, I returned to the United States.  I remembered this man's story, although I'm not sure exactly why.  Perhaps it was so odd to me.  I am used to testimonies that focus on the grace of God in Jesus.  I'm used to hearing stories that focus on personal redemption.  And all of that might have been there.  But the final piece of the puzzle for this man -- was that the Christian God created the whole world.  A god bigger than his country -- that was a god he would follow.  A God who created the whole world was a god worth believing in, a god worth following.

A God who created the whole world.  A God who loves the whole world.  Not just one country.  That is the God we confess when we come to church every Sunday.  That is the God we claim to follow.  So as much as I love my country, as much as I love this place I call home, I have to believe that God has wider concerns.  God loves the people fleeing violence in Central America, the displaced children in Syria, people who are starving, no matter their country.  God wants them to be fed.  God wants them to know God's love and grace.

I believe in a God who is bigger than my country.