On Friday, my day off, my husband and I drove south into Houston to attend the annual Christmas Bazaar at the Norwegian Seaman's church.  In some ways, going to this event seems a lot like going home:  my home state in Minnesota has a large Scandinavian-American community, and the decorations and the flavors and the sounds had a comforting familiarity.

And yet, it wasn't exactly the same.  This wasn't a church for people with a nostalgic, distant memory of their homeland, but for strangers and sojourners, people getting used to a new country.  Instead of feeling like the closed ethnic communities in my home state, there was an international flavor as we bumped into people from all over the country.  We talked to Minnesota Swedish Baptists and Wisconsin Lutherans and Norwegian immigrants planning a pilgrimage to the northern regions of the United States over the Christmas holiday.

While milling around a large crowd shopping for Scandinavian Christmas decorations, I happened to overhear some familiar sounds.  I recognized the sound of the Japanese language, although (sadly) I didn't understand any of the words.  I turned around and noticed four women perusing the Swedish linens and the Christmas trolls.

It has been over thirty years since I left Japan, after three and a half years as a missionary and teacher.  I recognized the sound of Japanese.  But I no longer understand the actual words.  Still, I wanted to make a connection.

"Ah," I answered.  "I lived in Japan a long time ago."  I emphasized word "long" so that they would not misunderstand that I was fluent in any way.

"Ah," they answered.  (Kumamoto is not known as a haven for foreigners.)

We all nodded to one another in the Japanese way, and then we parted.  It was a small encounter.  I didn't find out why they were here, or for how long, or how they found this place.   It was almost as crowded in the church as in a crowded train in Tokyo; hardly room to turn around, much less to have a conversation.

A little later I was standing in line to buy some Christmas decorations.  Right in front of me was one of the four women from Kyoto.  She had some small decorations, and I said, by way of making conversation, "Those make good gifts."

"Not gifts," she answered.  Then there was a pause, and she said the word, "Souvenir." 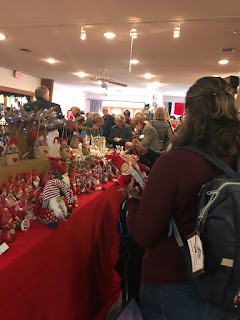 I paused too, and I remembered something -- one word -- in a language I (mostly) no longer understood.  I remembered the word for souvenir in Japanese.  "Omiyage?" I said.

I remembered what it was like to be a tourist and a teacher and a missionary, and the "omiyage" that I brought home.  A Japanese ningyo, a handkerchief with flowers, a teacup, a pair of bamboo chopsticks.  I was buying memories, hoping that so many years later, I would remember something about living in that strange place.

And there is so much that I have forgotten.  I recognize the sounds, but I no longer understand most of the words.

But there is omiyage.  There are souvenirs, and somehow they still do the job:  they make real the memories that seem so far away.  Was my life transformed on that narrow island so long ago, when I taught students English and Jesus, and saw God in their faces?   Did I listen to church services in Japanese, and join the members afterwards for curried rice served by the pastors wife?

Sometimes it surprises me how spiritual we think we should be.  After all, we believe that God became flesh and blood, and that his disciples touched him and he touched them, and that they ate and drank together.    And when he left, I wonder if there were times when they forgot what the sound of his voice was like, or forgot the meaning of his words.

But there are still souvenirs -- things we taste and touch -- that suddenly bring the meaning back to us.  All we need is a word -- or a phase sometimes -- "Bread of Life" or "Good Shepherd" -- to remind us that we once spoke a foreign language, and hoped for a better country.