After Christmas Eve services this year, I found a note in my box from one of our young worshippers. It was inside an offering envelope that contained a five dollar bill.  The note had hearts on it and also the words, "Best Church Ever." 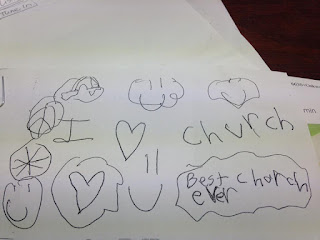 "Best Church Ever."
It's the kind of note a pastor wants to save, and possibly even frame.  Especially it's the kind of note the pastor of a small congregation, with more retired people than children, wants to save.   Our small congregation is tempted to look around and wonder what we have to offer families:  after all, there are many large (some mega) congregations around us.  They have large and busy children's ministries.  They have separate churches for children while parents go to "adult" worship.  They have age-specific ministries.  How can we compete with that?  We can't.

Even more amazing to me was that this note was from our 7:00 candlelight service, not our 4:00 "especially for families with children" service.  Now I happen to think that the 4:00 service was pretty great.  There were a lot of children there.  The service was engaging and interactive and we still got to sing a lot of Christmas carols.  Children got to pretend they were angels and adults got to wave canes and umbrellas and pretend they were shepherds.  A four year old boy stood out in the narthex and handed out candy canes to everyone who came.

At 7:00 there was no children's message, just singing and a sermon and of course, candles and darkness at the end.  It was not tailored specifically for families with children, although extended families attended:  grandparents and parents and grandchildren took entire rows.  Maybe that was part of why it was great.  Maybe children actually sometimes like to sit with their grandparents and their parents in worship and sing the songs together.  Maybe they even need to do it.

Or perhaps it was the candles.  There is something about receiving the light, and then sharing it with the next person, and then seeing everyone together in the light of the candle.  Maybe the seven year old who both receives the light and then passes it to the person next to him feels important, as if he is a part of something great and wonderful.

It is great to have programs for children.  Large churches can offer a lot.  But every church can offer what children need:  a place to worship with people older and younger than themselves, learning to sing and pray and know Jesus.  Every church can be what children need:  a place where children both receive the light, and can pass it along to someone else, a place where children learn that they are valuable and worthy, a part of the mission of God.

For those who follow the Revised Common Lectionary, this is the year of Matthew's gospel.  It was the first Gospel I studied as a student preacher, when I was on pastoral internship.  For the first time I paid attention all year, every single week.  I noticed the words and the themes and the images that recurred in Matthew's gospel:  how often there were mountains, how much time Jesus spent teaching, the friction with the religious leaders.

Even so, I have to admit, Matthew is not my "favorite" gospel.  Is it even right to say we have favorites?  Mark is the short, and breathless gospel.  Jesus is a man of action.  He is always going somewhere, doing something, healing people, casting out demons.  When I think of Mark, I think of the word "immediately."  I also think of the words "Son of Man" and "Son of God."  I think of Mark's abrupt beginning, without a story of Jesus' birth, and his abrupt ending, with a resurrection announcement but no appearance.  Sometimes I think that Mark is my favorite gospel.

Luke is the gospel of the poor, and women, and children.  Luke includes people that other gospel writers leave out.  Luke remembers the prodigal son, the lost sheep, the poor man Lazarus, the widow of Nain.  Instead of a sermon on the Mount, Jesus preaches on the plain.  Luke tells us of Mary and Elizabeth, and Mary sings about a God who lifts up the poor and brings down the mighty.  Sometimes I think that Luke is my favorite gospel.

John is the philosophical gospel.  Jesus speaks in metaphors and performs signs.  There is a depth that we cannot get to the bottom of, a mystery that cannot be solved:  the incarnate Word.  Jesus is the resurrection and the life, the light of the world, the Lamb of God, the bread of life.  Sometimes I think that John is my favorite gospel.

But Matthew?  Matthew makes me think that God is strict.  Jesus is a teacher concerned with righteousness.  "Unless your righteousness exceeds that of the scribe and the Pharisees, you will never enter the Kingdom of heaven",  he says.  "You have heard it said," Jesus says in the Sermon on the Mount.  "But I say to you..." he continues.  And every single time what Jesus says is even harder to do.  Matthew wants me to know that being a disciple is hard.  It is not all sweetness and light.  There is a cost to discipleship.

When Jesus teaches a parable about forgiveness in Matthew 18, he begins with a story about a king who forgives a servant an enormous debt.  It is a story of amazing, unbelievable grace.  But then the servant shakes down a fellow servant for a few bucks, and at the end of the story that forgiven servant is not only thrown in jail, but tortured as well -- until he pay the full amount.  O Matthew, do you really have to include the bit about torture?

I have mixed feelings about Matthew, sometimes.

If it weren't for Matthew, we would not have these words, "where two or three are gathered in my name, I will be there."

At the beginning and in the middle and at the end of Matthew, Jesus promises that he will be with us always.  Emmanuel.  Where two or three are gathered.  To the end of the age.  When we try to walk on water, and fail miserably.  When we can't count to seven and struggle to forgive.

I have mixed feelings about Matthew, sometimes.  He tells hard truths.  But he also tells me:  Emmanuel.  God is with us.  In the beginning and in the middle and in the end.

And it is enough.

Sunday is the 4th Sunday of Advent.  We will baptize two children that morning.

I'm tempted sometimes, when there is a baptism, to say, "there will be no sermon.  The baptism IS the sermon this morning."  And I mean REALLY tempted.  Compared to the parents and the children and the sponsors standing there, compared to the water being poured, compared to the prayer remembering God's mighty acts, and the words, "Alice, Michael, Emily, Matthew.... I baptize you in the name of the Father and the Son and the Holy Spirit" -- compared to this, what are all of my words?  Compared to the cross traced in oil and the candle given, "Let your light so shine before others." compared to all of this, the words of my sermon often seem tame.

Baptism is wild.  Something is happening.  We can see and hear and touch it, or at least some of it.  Underneath the things we see, something more is happening.

God is with us.

All of these things are happening.  When we see the water poured, when we feel the oil on our heads, when we hear the words, we catch a glimpse, but only a glimpse.

This is the 4th Sunday of Advent.  Something is happening.  Mary is going to have a baby.  It is a surprise to Joseph, and not a good surprise.  I always think that the promise of a baby is good news, but that is not always the case.  Sometimes the baby is bad news.  Sometimes the news is mixed.  Joseph knows that this baby is trouble.

It's true.  Jesus is trouble.  He is also Emmanuel -- God with us.  He will save us from our sins.  And he will get us into trouble, for his sake.

Sometimes when I have a baptism on Sunday I am tempted to say, "There will be no sermon this morning.  The baptism is the sermon."  But I never do.

But that's not all.  God is with us and he gives us this mission -- and that mission will get us into trouble.  Sharing the love of Jesus is not for the faint-of-heart.

The angel says to Joseph, "Don't be afraid."  There is going to be trouble, but God is in it.  Maybe that's what we should say before baptisms too:  don't be afraid.

Christmas is wild, too.  Because Jesus is coming.
Posted by Diane M. Roth at 4:13 PM No comments: