Singing, in and out of Church

My dad always sang in the shower.  He sang in the car, too.  And, he sang in church, standing right next to me.  He sang all of the hymns, and all of the liturgy, and even the bass part on the three-fold amen.  Sometimes, in the quiet of my heart, I can still hear him, singing in church.  Because he sang, I sang too.  I learned Beautiful Savior, and What a Friend in Jesus, and Children of the Heavenly Father, and Immortal, Invisible, God only Wise.

It wasn't just church, of course. My mom played a little bit of piano, just enough so that we could sing a few of the old standards.  And of course, there was always the shower, and the car.  There was always a lot of singing, and singing along.

So during this season that we have not been in the church building, it has been the singing together that I have missed.  I wanted to make sure that the services that we provided included some singing -- not just music, but singing, even if it was just one person, or two people.  Maybe nobody would sing along.  But maybe someone would.  Maybe even a few people would.  I hoped so.  I imagined just one person, maybe, sitting at their computer, singing along to a familiar song at worship.  I imagined that perhaps a family or two would not just stare at the screen, but sing along as we were singing a hymn, or a contemporary song.

We went to church every single Sunday when I was a little girl.  I mean it.  Neither rain nor sleet nor snow would ever keep us from missing Sunday morning worship (although I think that measles did, once).  We did not travel much, back when I was a little girl, so church was like clockwork; we never missed.  So I have a very vivid memory of the one time that my parents decided to sleep in, and not go to church one Sunday morning.  I have no idea what possessed them, but it did not catch on.  But what I remember is that my sister and I stood in the middle of the living room floor, holding my dad's old hymnbook, and we sang the liturgy.

I can't help but think, though, that perhaps this is a time to find our voice, not just in our church buildings, but out of them.  In the middle of the living room, for starters.  To learn to sing, and to speak, even when we can only imagine the other people singing along. 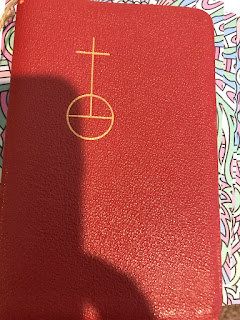 I heard recently from a friend whose church worships on Zoom.  The choir director there tells everyone to mute themselves when they begin a hymn.  Then, he tells them, "you can sing as loud as you want to!"

Every once in awhile, someone from my church will post a picture of their home worship space.  their candle, or their Bible, or whatever it is they need to set the space apart.  It gives me a little bit of hope.  Maybe the children are standing in the middle of the living room, singing.  Maybe they are having a conversation about God.  Maybe they are praying out loud, even when they are alone.

So, let us sing. Alone, for now
.  Loudly or softly.  Whether we sing in tune or not.  And let us sing of a love wider than we can imagine, stronger than death, greater than our national interests, bigger than the whole universe.
Posted by Diane M. Roth at 8:52 PM 2 comments: