The Child Who Held My Hand

It was Holy Week last week.  Our new pre-school director had a great idea, something we hadn't done in exactly this way before.  She wanted to have a short chapel session every day, and every day tell a little more of the story of Jesus.

So on Monday we had palms and marched around the chapel and told about how Jesus rode into Jerusalem on a donkey and how people spread their cloaks on the ground and shouted 'Hosanna!" And on Tuesday we told about how Jesus washed his disciples feet and how he shared supper with them.  On Wednesday we had flowers and Jesus prayed in the garden, and we prayed too, and the soldiers came.  And on Thursday -- on Thursday there was a cross and a tomb, and a centurion told us how he felt about Jesus and the cross.

I could have made him let go, but somehow I didn't.

Because he held my hand, I ended up walking with him out of the chapel and onto the sidewalk.

Because he held my hand, I kept walking with him.

A couple of times he rubbed the back of my hand on his cheek.  And then he just kept holding on.  So I kept walking with him.  We went through the front doors of the school, and he kept leading me until I ended up in his room.

I keep thinking about the journey through Holy Week, and the little boy who held my hand.

Usually I just say goodbye to the students at the door of the chapel.  I don't go any further with them.

But on Thursday, I walked the whole way, just because he held my hand.

This is how it is with us, and with the story of Jesus as well.  We can leave it there at the door, and wave goodbye, and go about our week.

Or we can walk with the story all week.  Jesus can become real to us, and his story our story, and we can walk and walk until we find ourselves in a place we never thought we would be.

Serving Communion in the Dark

I was glad on Sunday morning when I realized that the rain had not started yet.

Sometime on Saturday afternoon, I started getting news reports about severe weather.  It was first scheduled to arrive in the middle of the night, then sometime early Sunday morning.  But when I got up on Sunday, the rain had not arrived yet.

I was pleasantly surprised.  It was going to be an important Sunday in church, not just the 5th Sunday in Lent.  We had important things to do.  Afterwards, we had scheduled a meeting of parents and youth planning activities for the coming year.  We have never had enough children and youth to plan activities before, and I did not want our planning meeting to be rained on.

I also had scheduled a home communion visit in the afternoon with a homebound couple from the church.

We made it through worship without any rain.  I won't lie:  it was a gloomy, threatening morning, but it didn't rain and we even made it through our youth planning meeting.  When I went back home it had just started to sprinkle.

I called the shut-ins and said I would be over after lunch, but that I would be keeping an eye on the weather.  They said they understood and would see me later.

It wasn't long after we finished eating that the wind came up, and the thunder started.  On my phone I saw that there was a tornado warning in the area.  Then, just a few minutes later, we heard a sound I had never heard before.  I thought perhaps sirens were going off, but it wasn't exactly like that, either.

It was over soon after that.

I called my shut ins.  I couldn't get through.  My husband said, you will just have to go over.  So I did.

When I got there I discovered that their power was out.  They were sitting in the dark, eating hamburgers that one of their daughters had brought them.  Even the stoplights were out on the neighboring streets.

It was still daylight outside, but inside the house it was more like twilight.  We visited for awhile about natural disasters:  tornadoes and earthquakes and hurricanes and blizzards -- all of the normal things.  Their daughter fretted about what would happen if the power did not come on, and said she would be back to check on them later, to make sure they got to the bedroom all right.   They kept re-assuring her that they would be all right.

Finally, I opened up my communion kit.  It was getting darker, and I wasn't sure how well I would be able to read the prayer book.  But just as I was pouring the wine, the husband got out the biggest flashlight I have ever seen and flashed it right at me.  I felt a little like I was in the spotlight.

I tried to hold the book under the light and read the words while he held the light in his hand.  I opened the Bible and read the gospel reading:  about Mary and the anointing oil she poured over Jesus' feet -- and we wondered together about that scandalous generosity.  I felt the light on the book as I tried to read the pages, and the light warm on my face, making me blink.  The light exposed some things and hid other things.

And when I got to the words of institution and I held up the wafer and the small cup to the light, somehow I felt like a player on a stage -- the darkness all around -- this moment in time, this act, illuminated.

I watch the news and despair sometimes.  Of disasters natural and unnatural, preaching a gospel of chaos.  These are dark times, when it seems like we cannot see each other's faces, and know that we are made in the image of God.

And then the spotlight comes on in the darkness, as the oil is poured out on Jesus' feet.  The spotlight hits my face, and I realize that God is calling me to lift the cup, to break the bread, to say the words by which God reconciles the world.

The body of Christ given for you.  The blood of Christ shed for you -- and for all people.  In the darkness.
Posted by Diane M. Roth at 10:01 PM No comments:

Last Sunday afternoon I was in a meeting after church with a few other church leaders.  Our facilitator went around the room and asked us to introduce ourselves.  One of the questions she asked us to answer was "Tell us about something interesting that happened during the last week."

This should not be a hard question.  Right?

But when my turn came at the table, I drew a blank.  What was something interesting that happened during the past week?  I couldn't think of anything.

I wanted to excuse myself and go into my office and stare at my calendar for a few minutes.  Because interesting things happen to me all the time.  I have conversations and go to the hospital, and kneel down to talk to small children.  I was sure if she could give me a minute I could think of something.

I felt like somehow, I had not been present during the past week.  Had I let a whole week go by without paying attention?  I had to do better. 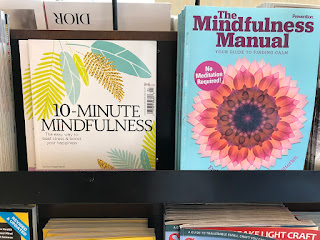 I remembered going to the bookstore a couple of days before.  This is a big outing for us.  It's a sort of a mental health break during the week.  I usually spend a little time checking out the current magazines.  I notice that there are a lot of magazines these days with names like "Breathe" and "The Mindfulness Journal" and "10 Minutes to Mindful Living."

There are the mockingbirds building their nests, there are people holding hands and praying in hospital rooms, there are tiny flowers pushing their way up in front of the sanctuary.  There are small children who wave at me when they are leaving pre-school in the afternoon.  There are people who will dare to tell you a story from their life, if you are wise enough to listen.  There are poets whispering words into your ears, and the azaleas are preaching.

I am not going to say that suddenly this week everything was better, that I started paying attention suddenly.  Life is still a blur sometimes.  But I am hoping to snatch a moment, here and there, like the little boy who was so excited that he got to go to chapel on Wednesday.  Like mist on the windshield, or the touch of anointing oil, when someone asks for prayer.