You are Now Entering Lent.... 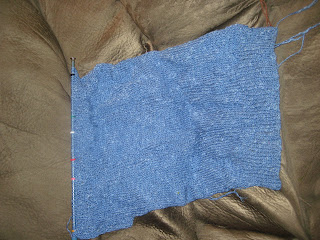 This will be published in a slightly shorter form in our church newsletter.

They say that confession is good for the soul, and since Lent begins this week, I have a confession to make.
I have several unfinished knitting projects lying around my house.
One is ½ of one cable sock. I brilliantly decided to learn to knit cable socks a few years ago. The cables are beautiful, and I figured out how to knit on four needles with no trouble. But I got stuck when it came to turning the heel. I didn't know who to ask to help me, so I gave up.
Another is ½ of a lovely aqua vest. I have no idea why this one didn’t get finished. Looking at it after several years, there doesn’t seem to be anything wrong with it. But there must be. It’s not done. There has to be some reason I didn't finish it.
Still another is a red cable scarf. When I began, I did not anticipate the difficulty of doing a "braided cable". Looking at it, it’s clear that the braided cable does not braid properly. I also now think that there is possibly a small mistake in the directions.
If I want to go even deeper into confession, I also have a half-done Bible verse sampler that turned out to be too complicated for me. It's counted cross stitch, and I counted wrong somewhere.
All of these projects, for one reason or another, I thought were somehow not perfect or too difficult, and I gave up on them. I thought my knitting project would not turn out perfectly, so I quit. I gave up.
I’ve been thinking about what I might "give up" for Lent this year as well. I could give up chocolate, which would be good for my waistline, or coffee, which would be good for my nerves, or dessert, which would be good for my waistline AND my pocketbook.
Instead, I think I’m going to give up the illusion of being perfect. I’m going to start with that red scarf, the one that isn’t perfect, and I’m just going to keep knitting it until I’m done. I’m not going to rip it out and start over, and I’m not going to quit and start another project. I’m going to keep knitting, hoping to learn and become a better knitter along the way.
And when I’m done, I’m going to look at that scarf and say: it’s not perfect, but it’s useful.
And perhaps I'll come to believe the same about myself, as well.
Posted by Diane M. Roth at 4:02 PM

This is really lovely Diane. Thank you.

May it be so for all of us!

Well that's darned good advice for all of us! So well said.

Thanks for your comment on my blog.
In the end the only "safety net" the poor have is the care and concern of those who have. Whether expressed in use of tax money or charity. The more self centered we become the smaller the net.
I loved your examples in today's blog. Since we are always both Saint and Sinner we will always be flawed but loved by God.
For Lent encourage people to give instead of giving up.
Give time evrey week to hospice group, or a free food kitchen, or visiting jails or nursing homes. Let them sacrifice by caring.

Diane, this was just amazing to me this morning. I love it.

Excellent! Have a blessed (and productive!) Lent!

What a good meditation for today.

Your insight has been a gift to me this morning. Thank you.

Thank you, thank you, what a wonderful insight, and just the one I needed today!

what a beautiful reflection and challenge! Thank you for sharing.... now maybe I'll finish that scarf too ;)

I gave up on perfectionism on a quilt I started in about 2001. I finished it in January after a big push in the previous three months! I was able to finally give it to my daughter for her ordination. It was so much work that I finally realized that the most perfect quilter in the world couldn't make it without a mistake or boo boo.

Then I was thinking perfectionistic thoughts prior to having all the company for the ordination. Yikes, was that ever stupid! Did I really think that people would be judging me? Now I know that I'll enjoy the company more if I don't focus on the small stuff, but on the big picture. Even this old dog can learn a new trick.

Good thing our Lord focuses on the intentions of our heart and not only on the deeds of our hands.

Blessed Lent to you.

oh happiness, Diane. I do encourage you to press on...I wish you were here, and I would happily encourage you through that sock, also!!!
Thank you so much for this, I wish you a most wonderful and holy Lent.

Oh, well done! I'm doing something similar in terms of just being me this Lent...attempting to silence the perfectionist voice in me and simply rest in God.

wonderful. I think it is time that I start on a pair of socks, do not frog them, just keep knitting(can you hear Dorrie's voice?) and do them. Imperfectiosn and all.

this was beautiful, really a needed message for me today. thank you, and blessings on your lenten journey.

Right on, Diane. But such a hard thing because we DO want to be perfect. But, of course, if we were perfect there wouldn't be much need of grace.

Wow. Completely apropos for me.
thank you...
deb

Another beautiful reflection! Thanks Diane.

Giving up the illusion of being perfect -- that is a wonderful idea!