I have started knitting again.

I haven't been knitting that much, since moving to Texas last year.  For one thing, I felt overwhelmed at first.  For another thing, people kept telling me that I would never need those warm socks and footies that I loved knitting.  And when it's 100 degrees out, and it plummets to about 85 at night -- well, it just doesn't seem like knitting weather.

But, the temperature has been dipping down a little lower lately.  Also, it is Advent now, just barely.  So I got out my trusty knitting needles and threw caution to the wind.  I started knitting a pair of footies.

It is not a bad way to spend Advent. 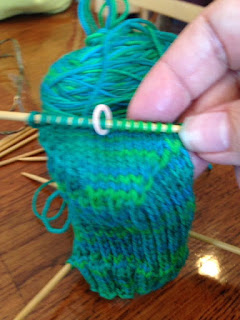 One of the first words we hear in Advent is "Wait."  Wait, because it is God who is coming to us, and not the other way around.  And we can pray for God to come quickly (and sometimes we even do), but there is not one thing we can do to MAKE God come.  This one is on God.  Salvation is on God, not us.

But in the meantime, we wait.  But while we wait, we are reminded that there are things we can do.  They won't make Jesus come more quickly.  But they are things that testify to our hope.

So we light the candles.  There are so many ways to light the candles:  by giving away bread, by sharing a cup of water, by holding the hands of the dying, by standing up for the vulnerable, by welcoming the stranger.

As for me, today I will knit.  And I will consider the one who, by his grace, inhabits even my hands, even our hands, and who has knit us all together by his love.
Posted by Diane M. Roth at 8:55 AM No comments:

What Makes Us Great

It is Thanksgiving Day.  It is a couple of weeks after a bitter national election.  I have been thinking about both of these things.  I can't avoid the sight of the red caps which read, "Make America Great Again."  It may be an occupational hazard, but it can't help thinking about them, and wondering about it.  What makes us great?  How do we define it?  how do we know when we get there?  Is it a place we stay or do we just catch a glimpse of it?  What makes us great?

For my former congregation, formed just after World War II, one of the things that made us great was winning World War II.  After that, America was a undisputed superpower.  We also had nuclear weapons, with all of the power and responsibility that they carried.  We had prosperity (we also had very, very high taxes, because we had to pay for the war, but that is beside the point).  We had new, labor-saving devices.  We had all of these women who had gone to work during the war, leaving the work force.  We had all of these soldiers, coming back to their families.

But I learned another narrative of greatness from some of my World War II parish members; I learned about the Marshall Plan, and how the United States and the allies had helped restore their enemies' countries, after the war.  I don't know why we did that.  After World War I, the world had punished the losers, rather than helping them rebuild.  But after World War II, we bound up wounds.  I don't know why.  Maybe the Depression made people more aware of suffering.  Bread lines.  Hunger.

What makes us great?

Since the election, I have been spending more time than usual visiting people.  It is not because of the election.  It has just happened that way.  One woman and her daughter have returned to our congregation after being away for awhile.  We are planning a congregational celebration of her daughter's 15th birthday, and also beginning confirmation instruction.  A new member of the congregation wants to start a mens' group.  Another new member is passionate about prayer.

I have also been visiting with communion, more than usual, or so it seems.   One to one, with people in the hospital, at home, who come to church.  I open the Bible, the communion kit, search around for the right words.  Yesterday, I took my communion kit again to a woman who had just returned from the hospital.  After the service, she said that the only thing missing was a song.  I promised we would sing, next time.

There is something about sitting down with a Bible, bread and wine, and words of prayer that brings ministry down to its most basic level.  This is who I am:  a servant, sharing bread, reminding people or their common hunger.

What makes us great?

Bread and wine, the words of promise.  Water poured, the water of life.  A song at the right time.  Acts of compassion, even for enemies.

Reading the Bible in Church

Today was All Saints Sunday in Church.  We did many things in church.  We sang, we prayed, I preached.  We opened our hands and received communion.  We even said, "Christ is risen!"  We lit candles to remember those in our lives who had been saints to us, who had reflected the light of Christ to us.

And, we read from the Bible.

We read from the Bible every Sunday at church.

But today it felt different.

But I read them, because they were the words of the appointed gospel for today.

And then, three little words:

I don't know what my congregation heard when I said these words.  I felt time slow down while I said them.  "Love your enemies,  and do good to those who persecute you."

I felt like Jesus was speaking them directly to me.

I opened the Bible and the words of Jesus exploded in my face.

They made me consider again what it will mean, and what it might cost to be a follower of Jesus, in such a time as this.

Tomorrow is All Saints Sunday in my congregation.  I love this Sunday, for many reasons.  I love lighting the candles.  I love remembering.  I love saying the names and knowing some of the stories of the particular saints in my own congregation.

I don't know why it has never occurred to me before how close All Saints is to Election Day.  But on Sunday I will be naming names and lighting candles and talking about the hope and witness of the saints.  On Tuesday it will be Election Day.  Many have already cast their vote, or will cast their vote.

Maybe a better question is this:  What do we hope for?

But the hope of the saints is not limited to that better city.  That hope lights my way right now, even when fear grips me.  The hope means that whatever happens on Tuesday, I will live hoping for a world where the poor are blessed, where the weak are protected, where there is enough for the hungry.  I will live looking for ways to provide shelter for the homeless and for the refugee.

Tomorrow I will light the candles.  And remember that I am a witness too:  I am a witness not to any particular political candidate, but to the love of God.  Every candle is a witness:  against fear, but mostly -- for the victory of God.
Posted by Diane M. Roth at 9:01 PM No comments: