I presided at my first ever house blessing last weekend, after church.  A member of my congregation contacted me and asked if I would come out sometime in June and bless her home, and all of the rooms.  She said that a former pastor had done it for her once, many years ago.  This time she wanted her house blessed because it had been damaged in the hurricane last August.  They had spent the past nine months repairing and painting and decorating:  just she and her son, and a few of his friends.  It wasn't quite done, but she felt that it was time to celebrate their hard work.  It was time to celebrate her home.

I did not grow up hearing about a custom called "House Blessings".  We didn't study it in seminary either.  But somewhere in the past few years, something must have made me curious, because I have a distinct memory of googling "house blessings", and of asking a friend of mine who is Episcopalian to send me a copy of a house blessing from his Occasional Services Book.  I kept that for a long time.  Perhaps I just wanted to be ready, just in case someone asked me.

So when this woman called me, I was eager to come.  And I discovered that my denomination's new Occasional Services Book now had an order for the Blessing of a Dwelling.  I asked my church member if I needed to bring anything.  "No," she said, "but bring a few people from the church.  I want to celebrate with them."  I told he that the service called for the lighting of a candle.  She said that she would purchase one.

She also told me that she would serve us a special meal at the close of the blessing.

I checked my Occasional Services Book, and guess what?  The order of worship says that "a meal may be shared."

I had never been to this woman's house before.  So, on the day of the blessing, I turned on my trusty GPS and we set out.  It was not far, but the house was off the beaten path.  We turned on a couple of gravel roads.  I was afraid I might be lost, but I was not.

The house was modest and beautiful, each room painted in bright colors.  Everything said "celebration" to me.   There were friends from the church, and a friend of her teenage daughter.  We discussed briefly which rooms she wanted me to bless.  At the right time, I stood in the middle of the living area, and we lit the candle and began.  We took the candle from room to room, reading scripture and praying in each area:  the entrance, the kitchen, the bathroom, the bedroom, the place where pets were kept.  There was even a special scripture and prayer for a teenager's room.  I asked her daughter which Scripture verse she wanted me to use (there were two choices).  She chose this one: 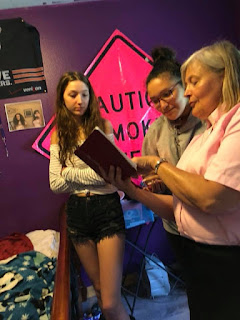 Near the end, there was a suggestion for everyone to remember the promise given to them in baptism, to serve everywhere in Christ's name.  And the rubrics said, "Water may be sprinkled on the people in thanksgiving for the gift of baptism."  I wasn't sure what to do, but it seemed like a good idea.

Her teenage daughter said "Wait a minute," and came out with a water bottle.   I sprayed everyone's hands with the water bottle, and we laughed.

Then we prayed the Lord's prayer, and we sat down to the feast prepared for us.

It was my first house blessing.

And I was blessed.

I think how at the end of the service at church I give the benediction:  the blessing.  Why should it stop there?  Why shouldn't it extend into homes and neighborhoods, among friends and neighbors, along gravel roads and at meals, and where people are weeping and where people are rejoicing?  Why shouldn't it extend even farther out, beyond the boundaries to the outcasts and the hungry and the lonely and the desperate?

We have forgotten our mission.  It is blessing.

Children ask questions, that’s the truth  They ask innocent questions, they ask annoying questions, they ask the same question over and over again.  They even ask theological questions.
I remember getting a phone call one day from a young mother in our congregation.  She was looking for advice:  theological advice.
Her three year old was asking questions.  Well, one specific question, actually, and she didn’t know how to answer:  “Where Is God?”  What do you say to a three-year-old? She asked, when they ask this question.
What’s the best answer? She wanted to know. 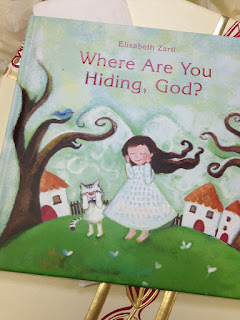 Now I knew this woman pretty well, and knew she knew the answer to that question – for herself.
She was a woman of deep faith – faith which had already been tested.
But she took  her daughter’s question seriously, and she wanted the right question – for her child

What do you say to a three year old?  Or to a five year old or a twelve year old, for that matter?

I am reminded of this question when I think about the story of Isaac today – because the story itself raises a lot of questions that demand answers.
For example:  What kind of God asks a father to sacrifice his son?
Why would God do such a thing, ask such a thing?
We think religions that demand child sacrifice barbaric. And here is God, testing Abraham.
You can say, after the fact, that God did not end up requiring it, but while it is happening, it’s still pretty horrific to think about.
What  is God thinking?
And even though these questions seem important to us, they are apparently not important to Abraham.
He’s not asking any questions.  He’s just obeying.  At least this time.

But there is someone asking a question.  Isaac, the child.
And his question is central to the story, but perhaps not so important to us, who ask adult questions, and seek adult answers.
This is the question of a child.
And like the mom who came to me for help, Abraham the parent wants to give him the best answer he can.  “Here is the fire and the wood, but where is the lamb for a burnt offering?”  Isaac asks.
Abraham listens to his son’s question.  He takes it seriously.  “God himself will provide the lamb,” he replies.

There are a couple of pieces of this story that might seem like details, but I think are important.
The first is this: that three times Abraham hears a call. The first and the third time it is God calling.
Abraham answers God: “Here I am!”
The second time, the middle time, it is his son, Isaac, calling.  Abraham answers his son the same way he answers God, with the words “Here I am!”
He really listens to the voice of his son, and he takes Isaac’s words, and his question, seriously.

The second piece of the story is the element of trust:  Abraham trusts God, and Isaac trusts his father.
Why do I believe this? I believe that Isaac question is a sign that he trusts his father – he trusts him enough to ask a question.
His question is innocent:  the idea that he himself might be the sacrifice does not seem to occur to him.
And Abraham trusts God – I believe ultimately, and even while he is getting ready to sacrifice his son, he really hopes that there is a way out, that God will not require this.
When he tells his servant they are going ahead, he says, “the boy and I will worship, and then WE will come back to you.”
His words to his son also indicate this trust, “God himself will provide the lamb….”

This week I saw a snippet of one of the presidential press conferences.
Sarah Sanders was answering questions, and she saw a young reporter – and when I say young, I mean he was a child – and she smiled and said she would take his question.
I think as a mom herself she felt a warmth and thought he would not ask a hard question.
But the young reporter told her about the fear he and some of his classmates have when they go to school, and asked what the president and what the government was going to do to help them feel safe.
And when Ms. Sanders responded, I could tell that she had really listened to him, because for a few moments she teared up, and she had a hard time responding.
It felt like a genuine moment, so rare in our hyper-partisan time.  It felt like a moment of real listening.

And when Abraham answered with the words, “God himself will provide the lamb” he opened up a way not only for himself, not only for Isaac, but for all of us.
He spoke out of his deepest trust, his deepest hope, that God would provide a way through a hopeless situation.
And he was right. There was the ram in the thicket. There all along.
There was the offering. God will provide.   In our deepest questions.  In our deepest need.
Not an answer, but a lamb.
The lamb of God. Jesus.
Not just for Abraham. Not just for Isaac.  For us.
When we are cut to the quick, when we are sinking in despair, when we are asking “why?”, when we are dying to live.
When we have tears in our eyes because we don’t know the answers to our children’s questions.
When our tears are because we know the answer – and we fear it.
When we know our failure.
When we know our grief, too deep to bear.
There is the lamb of God. There is the lamb of God.    When we are broken.  When we have failed.   When we have failed to protect our children.