Earlier this fall, I was invited to attend a workshop hosted by our local Council of Churches.  The subject was Alzheimers and other forms of dementia.  I wanted to go despite the fact that it's not easy to find time when juggling a busy pastoral schedule.  There are the workshops about Alzheimers and then there are people to visit who are struggling with their own, or their spouse's, or one of their parents'  memory loss.  When I think of the shut-ins in my one congregation, when I go down the list and name them and remember them, the number who are experiencing some form of memory loss startles me.  In funeral sermons, it often becomes a theme:  God remembers, even when we do not.  God has inscribed us on the palms of God's hands.  God keeps our days and our deeds in God's peace. 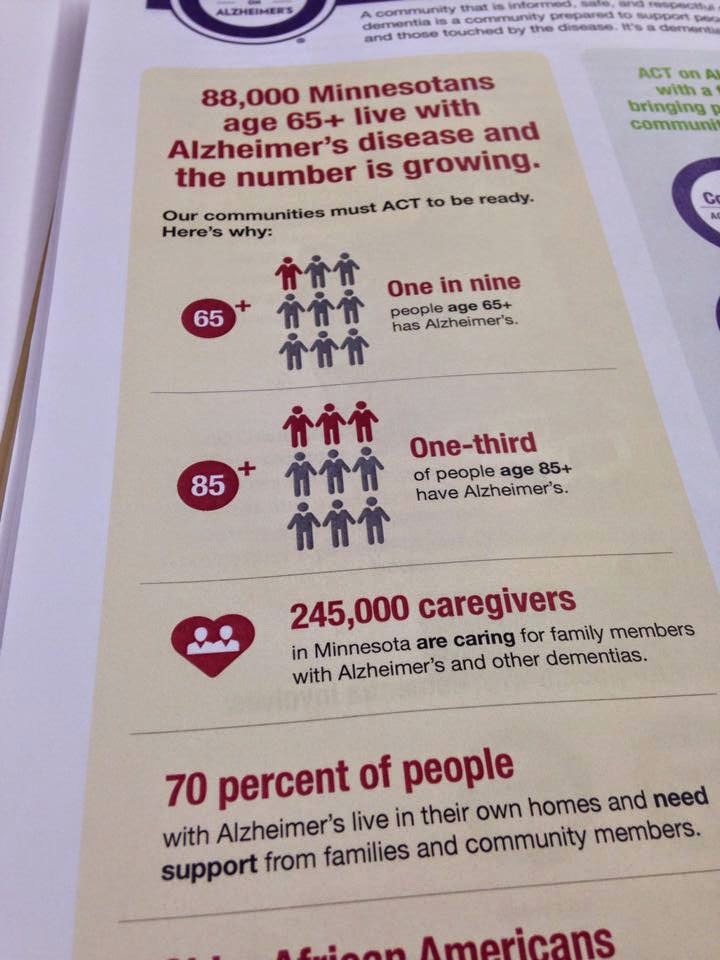 The other thing I remember is this:  There are some forms of memory loss that are natural as we age.  But Alzheimers is not a part of the normal aging process.  It is a disease.

I remember back to the days when we were told that if we kept our minds active, doing crossword puzzles and reading and thinking, we could keep memory loss at bay.   There are things we could do to reduce our chances.  But when I look at my congregation, I know there are former avid readers and cross-word do-ers among those who are losing their memory.

There is one woman I visit who does not remember that her husband died thirty years ago.  She thinks he died last year.  Or last month.  However, every time I mention the name of our church, she beams.  "I go to that church," she tells me.  Another woman imagines herself a little girl again, playing with her dolls.  Sometimes she has long conversations with her husband, who has been dead for many years.  One man became violent and his daughter had to remove him from one nursing home to another.  But then, in the car, he suddenly said, 'I love you', something she had never heard him say.  She almost drove off the road.

I remember visiting a lovely retired couple in their home.  Every month I would bring them communion.  He had ALS; she was legally blind.  We had these wonderful conversations about music, art and travel until he became unable to speak; he could only blink his eyes yes, and no.  After he died, I continued to visit her for a time.  I remember how excited she was when she got one of those reading contraptions and she could suddenly read the Bible and her devotional books again for the first time.  She was an active participant in a Bible study, and loved it.

And then, suddenly, and very quickly, she lost her memory.  She became unable to care for herself, and finally, to speak.

At her funeral, I saw a picture of her in a nurse's uniform, during World War II, and realized how little I knew about her life.  How little we know about each other's lives.

I'm struggling with this:  that I do believe that it is our responsibility, part of the church's responsibility, to pay attention, to remember, to keep safe the vulnerable ones among us.