My Last Day In South Dakota 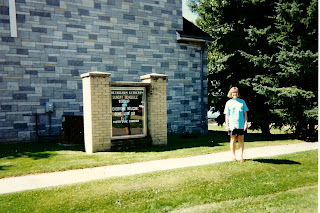 I had really left two weeks before, on a Sunday afternoon. It was the middle of May. I preached my last sermon, a story sermon without notes, I remember. I stopped at an anniversary celebration for the retired pastor who lived in my community. And I drove, my car full of boxes (and one cat), to my new call in suburban Minneapolis. My parents had taken a car-full as well, and my mom had tried to help me organize and pack the possessions that had bred like mice in the parsonage during the last four years.
But I wasn't done yet. The moving truck was coming at the end of May. I had left some half-packed boxes throughout the two-story, five-bedroom house I had managed to fill up all by myself. So, on Sunday night two weeks later, I drove back to the prairie and walked back into my home.
My church secretary and my past church secretary both came over that night, to help me finish packing the rest of my boxes. I had started out with such aspirations to organize: books, music, dishes, clothes. It all made sense at first. Somewhere along the way, though, I had discovered items that didn't quite fit into my neat categories: "miscellaneous". Miscellaneous, it turned out, was my biggest category. Gifts, stationery, a cloth angel wall-hanging, candles, bric-a-brac, scripture verses, hand lotion, bath soaps -- after awhile many things became "miscellaneous."

Monday morning I was still working when the movers arrived, two earnest young men from the big city. They seemed bewildered to be here, as if they had taken a wrong turn and fallen off the edge of the world. One of them talked more than the other. He saw my grandmother's old piano in the corner and said, "That's staying here, isn't it?" "No, that's going," I answered. He saw my small television in another corner, and asked some question or another about a show I never watched. "I don't get that station," I replied. "What? You don't get cable?" He looked around and said, "I could never live in a place like this."

Loved it. Loved reading every word.
I lived in a not-as-rural place and you helped me to recall some of those same feelings that little towns evoke in me.
Keep writing. This is so great.

Wow. It made me tear up. That's good Diane.

I felt like I was there. It really touched my heart deeply.

How was your time away?

I send you prayers of peace, blessing, wholeness, healing.

I will post on it tomorrow, with pictures. promise

I liked the way you "answered" the questions of the movers as you went along, which both told the story and let us see what was going on in you at the same time.

What a great read, Diane! I'd be interested in reading more...

Well, you do never know. I was a city gal, ended up (for the last 30 years!) in a town of 620. I don't know if I could handle a town of two digit number population, but I LOVE IT HERE.

God wants us to bloom where we are planted. I've found that the small town and the church here really does help plant me, water me, tend me, fertilize me, etc.

I NEVER had anyone take an interest in me in my city church growing up nor in my extremely large high school. But people here have nurtured my kids personally.

Now I'm wondering where my pastor-to-be-daughter and family will end up. She is in the Oct. draft.

p.s., I'll be praying for your daughter.

Diane, I think it's wonderful. Don't give it up. Please continue working on it.

I love the interplay between your thoughts and what's actually happening around you.

My thought: I could never live in a place like that. But you're right. You never know.

I'm a city girl who has lived in a small town for close to 40 years and never really got used to it.

Yesterday, when I went to New Orleans to the service at which the presiding bishop of the Episcopal Church presided and preached, I thought to myself, "I'd really like to live here." I can't shake it off.

i think for any pastor that has lived in a boonieville and not grown up in one but rather been transplanted there... the words are so familiar it is to all of us our story in so many ways.

yesterday the wind was right and we did get NBC (via the antenna on our roof). i am one of about 5 folks in boonieville without sattelite tv... but a girl's gotta budget ya know? :)

I enjoyed this...there are so many memories and emotions associated with moving, and you've captured them really well. Keep writing!

Is there an autobiography in the future for you? Your writing flows nicely. I could see the picture quite well.

It's really great--I can see it all and feel it all!

diane, I am finally catchin up with my blog reading. This is a lovely, well written, engaging story. I might even say, "Poetic"...looking forward to more.

Bangs, Texas is just six miles west of the town I went to college in. I used to drive through on my way to the farm or other points west. Not much west of Bangs, really. Anyway, every time I drove through I said Thank God I don't live here. I could never live here. Sure enough, my very first job after graduation was editor of The Brown County Gazette in Bangs, Texas. I got myself out of there as soon as I could but, as you say, you never know.

Loved reading this....especially after the "trading places" conversation. Life is such a great adventure when we let the Spirit have her way with us a bit now and again, yes? Keep writing, good stuff!