Snow Day at the Pre-School

Friday was a Big Day at the pre-school associated with my church.  Even though the temperature was approaching 70 degrees and sunny, it was Winter.   A whole load of snow was delivered to the space between the sanctuary and the playground, where it was piled up in mounds for the children.  There were two bales of hay to serve as artificial hills, there were plenty of brightly-colored plastic sleds, and there there were children in jackets and snow shoes and boots.

It was Snow Day.

Did I mention that it was approaching 70 outside?

I come from a snowy land far north from where I am serving now.  I have to admit that, while watching the children I felt both misty-eyed and surreal.  I could have been wearing shorts.  But in front of me, children were playing in the snow, making snowballs and hitting each other, sliding down the hills millions of times, eating snow (is this universal?),  laughing and even (I thought I imagined) making snow angels.

I wasn't dressed appropriately, but I found myself wanting to get down in the snow and show them how you make a snow angel. 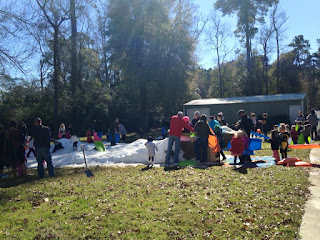 These children never see snow.  They don't get snow in this part of Texas.  At least, if they do, something is Seriously Wrong.   I have heard (but have not yet experienced it) that they get occasional ice storms.  But no snow.

I have been around snow my whole life, but it has been a few years since I experienced the fun of it.  I am not a winter sports aficionado.  I'm not great at ice skating, and I haven't gone sledding for a number of years.  The morning activities took me back to the big sledding hills of my youth, when winter was still fun:  snow forts and big hills and yes, even snow angels.  Now all I can think of is slipping on ice, shoveling out, the perils of driving, the nuisance and the danger.

I had forgotten the joy.

Joy does not deny the reality of storms, or shoveling out, of slipping on ice.  But still joy takes the moment to rip paper from Christmas packages, to dance in church, to taste snow,  to make a snow angel.

The joy of the Lord is our strength, which is why we need children, not relegated off to the side, but in the middle of our lives.
Posted by Diane M. Roth at 8:33 PM