Those who know me know this:  I'm not much of a gardener.  I've dabbled in herbs, and while in South Dakota I successfully harvested carrots and rhubarb for a couple of years (although I couldn't take much credit for the rhubarb).  I planted a few peas one year, got excited and planted about three times as many peas the next year.  The rabbits ate them all.

I will confess, I feel particularly inept at planting or growing flowers.  The only flowers we have had here are the hostas and the overgrown peony bushes; both were here when we got here.   I planted a few annuals one summer on the south side of the house, but they didn't do well.

So last year I sent out a cry for help:  a friend of ours is a landscaper by trade, and he dug up the overgrown peonies, and put in a few perennial bushes on the south side of the house, which had been mostly weeds, and he added a few flowers and bushes to the front of the house, where there had been mostly yews, with one mock orange bush.  There have been a few bumps in the road, what with last year's oversupply of rabbits (who ate a couple of our young bushes) and this year's terribly late and mostly non-existent spring.

But slowly, slowly, things are happening in the garden. 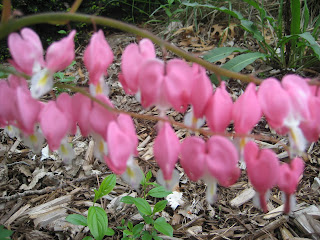 For one thing, a few of the peony bushes are back.  They aren't so welcome, but we're going to keep them, at least for the spring.   There aren't so many flowers in the front yet, but things are coming up, a little bit every day.  There are two bushes that just look slightly greener every day.  You have to really keep your eyes peeled to notice the difference.  It started with just seeing a little bit of green at the core, where all of the branches were dead.  But little by little, the stems are turning green, and the leaves are starting to appear.

Then there are the Bleeding-hearts, two bushes with dozens of flowers.  They are first fruits of those who will bloom.

It's humbling, because, unlike most gardeners, I didn't plant these flowers and bushes.  I don't even know what most of them are called.  (I'm hoping that this will be an occasion for self-education, though.)  I am, at least right now, simply watching, watching the flowers, first the Bleeding-hearts, and who knows what will be next?  First the Bleeding-hearts, then the others that I need to tend, and study, and learn the names.