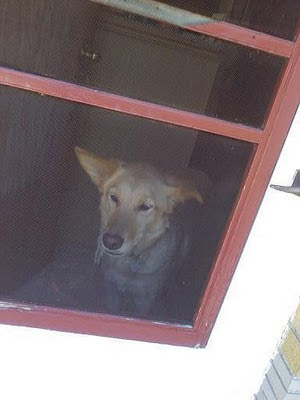 It started when we crossed the street one day, on the way to our favorite pond.  We were going along nicely up the street, but there was some construction work going on around the corner, and as we got closer, Scout started to do her famous "walking backwards" dance, which signals not just stubborn "I don't want to go where you want to go"-ness, but actual fear.

I know, I've tried.  I get her to stop walking backwards and just sit.  That does work sometimes, but even if I talk to her in a nice, bright, soft voice, and tell her there is nothing to fear around the corner, or just past that car that is running, or past that group of children that is shouting -- even if I tell her all these things -- she doesn't believe me.

In the past couple of weeks, she has started walking backwards a couple of times on our block, which is so disheartening.  I don't want her to become like one of those people who is afraid of everything, who hides in their house.  And though there is no sign of this happening, I certainly don't want her to become one of those dogs who growls and snaps at people because she is afraid.

I'm working with her a little bit each day, not trying to force her to go where she doesn't want to go, but trying to increase her comfort, even if we just go a few more steps.  We're working on broadening her circle just a little bit, and hoping that she discovers that she will not get hurt.


To be perfectly honest, though, I'm more frightened about the people running around, calling people they don't agree with "Nazis" or "Marxists" or "Communists."  I'm more frightened of some of the people who are afraid.
I read a conversation between two conservatives.  One of them interviews the other, saying, "I don't agree with President Obama's policies and I wouldn't vote for him.  But I don't believe it's accurate to call him a communist or a socialist.  Why do you do it?"  The other one says that he's going to keep saying the same thing, because, of course, there's more than one way to understand the word "socialist".   (By some understandings, Medicare is socialist.  Perhaps by some understandings, Public Education is also socialist.)
But the words "Socialism," and "Communism," of course, elicit fear.   And fear can cause us to do many things, including snarl and bite.  You can intentionally make a dog afraid, and then set him loose on a victim.
A long while ago President Franklin Delano Roosevelt said that the only thing we had to fear was fear itself.  I don't think he meant that there was nothing to be afraid of.  There were plenty of things to be afraid of during those depression years.  But if you really want to be afraid, check out what scared, desperate people are capable of.  Over in Germany, someone used a whole nation's fear and desperation to rise to power, to create scapegoats and to murder people.
In the meantime, I'm going to take a deep breath and admit that I'm afraid, too.  I'm afraid of the fear I hear and see, and the consequences it might have.  But I am trying hard not to snarl or growl, and not to start walking backwards either.   Instead, I tell myself that I have hope -- I believe in the love of God for every person.  I believe that in the end, Love wins.  I believe that hope is greater than fear.
And I just go a few more steps forward, every day.
Posted by Diane M. Roth at 8:59 PM

much evidence to the contrary (at least in my own life the last couple of years) I believe that too...even still.

oh, and looks like I won't be heading to MN, not even for an interview....sigh.

Mompriest, I am so bummed. we might be in your area for Thanksgiving, I'll keep you posted. would love to see you again. wish you could move here.