Once upon a time, I lived out on the prairie of South Dakota, in a little town with no gas station, no restaurants, and no grocery store. We did have a post office, though.

I thought I knew something about rural living because my mother grew up on a farm in southwestern Minnesota and I used to spend time with my grandparents there, especially in the summer. I also thought I knew how to behave in a snow-storm: after all, I'm from Minnesota. I know how to drive when it's slippery, and I know about keeping a shovel in my car, and I even used to keep an extra bag of cat litter in the car just in case I would get stuck (yes, cat litter).

So one Monday morning (my day off) in December, I made an appointment to get my car "winterized." Now I'm from Minnesota, so I know how important it is to get your car winterized. But that same morning I also heard that there was some weather coming in -- they thought at about noon.

And they said that it was going to be a pretty big storm.

So my two thoughts were: 1) It's even more important that I get my car winterized this morning, and 2) I'm sure I can get it done and be back home before the weather gets really bad.

So I went and fixed the car up in the nearest city to me (30 miles away) and then I headed for home. It was already starting to snow and to blow (that's the important part) but I thought, "This isn't too bad. I can do this. After all, it's not slippery or anything."

As soon as I got outside the city limits, I realized that I was wrong. I also learned w 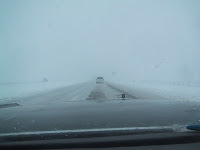 hat the word "white out" means. It means that everything is literally white. I couldn't see anything on the road ahead of me. All I could see (sometimes) was the white line marking the edge of the road. I wasn't thinking any more "I can do this". I was scared. I wasn't sure at all that I could do this and not end up in a ditch.

At one point my route passed through a very small town, and I was able to see a little better. At the same time, I suddenly remember that a retired couple from my church lived in this town, just off the main road. In desperation, I turned into their driveway.

Lucky for me -- they welcomed me. In fact, they were happy to have me stay -- for the next two days while the storm continued. They even found an extra toothbrush for me. (You see, they were prepared.) After that, I sometimes referred to them as my "storm home."

I got smart after that -- or at least I thought I was smart. I thought -- from now on I am going to be better prepared for emergencies. So I started always to keep a bag in my car from then on, with a change of clothes, my Bible, a toothbrush and a couple of other items. Of course, I never had to use the bag, because I never got stuck in a snowstorm again. I had learned my lesson, I suppose, about the dangers of snow and wind out on the prairie. I suppose you can say that I "repented" of my foolhardy ways, learned to be more cautious, and learned as well to be better prepared.

But is that what the word "repent" really means? It does mean change -- that's for sure. It also means "turn around", which gives me a whole different perspective on repentance, and when and why it occurs.

So, when do you think I "repented" in this story?

Oh, and this as well: Most people believe that you repent in order to get forgiven. But I believe that it happens the other way. We repent because we have been forgiven.

We turn off the dangerous road because we know there is a house with a light in the window and a fire in the fireplace, and friendly people with open arms and soup simmering. And we keep turning toward God's promised life of grace and adventure, because we know that there are storm homes dotting the landscape, with open hearts and hearths, welcoming prodigals and pilgrims.

"Most people believe that you repent in order to get forgiven. But I believe that it happens the other way. We repent because we have been forgiven." -- Amen...I like that. Thanks for the wonderful story.

Diane - you have such a way of taking me away with your words and then -boom- you bring it to a whole other level after that.

This is so awesome! Having been in one of those whiteout experiences out here on the prairie I was driving along right with you! I am such a fan of the true undersanding of repentance and you captured it so well! Wonderful!

And I've "been there, done that" with the blizzard driving experience! :)

Diane you do have a gift. I like what Pastor Eric liked.

My repentance story is about learning to always carry a change of clothes, sleepwear, and toiletries on a plane with me, after being stranded once without any of that.

Now, I always do, and on one occasion, I used them. I was the only person on a large trans-Atlantic plane to have a change of clothes.

Of course, your lovely reflections on your repentance make your story beautiful, while mine is a hum-drum, "Here's a lesson for you."

someone said to me once "to repent is to give up the notion that you can save yourself by your own efforts." I like that, too...

Diane, great story, well told, well interpreted. As a native Californian who doesn't ski and therefore enjoyed pretty much snowless winters, I don't like driving when I cannot see the road for any reason, but dealing with snow and ice along with the vast unmarked goes way beyond. You take us all into the experience very well. By the end we know what you mean by repentance. Thanks!

This is a wonderful repentance story! Thank you!

I completely agree with you that we are able to repent BECAUSE we are forgiven. Only because of what Christ first did for us are we able to come before God and admit that we are not able to "do it" ourselves. Thanks for a great story.

This is so beautiful. Thank you for sharing this story, and your wonderful way of telling it. I believe Thomas Keating talks about repentance as changing direction. I love how you say it is not just a turning away from, but a turning toward.

Having trouble getting my comment uploaded here at Mom's on dial-up. I just have to say that I agree with all that this is a wonderful story and you've managed to give us a wonderful understanding of repentance. I do hope you will someday manage to get all of these stories of yours published!

yup! I like that story...and am glad they were there for you and that you were willing to stop...I probably would have gone on...sigh...but I like to think I would have had the courage to stop like you did.

well mompriest, in this particular situation, if I had gone on, I would certainly have gotten stuck in a snow drift. Because of the wind, the roads kept drifting shut. At the time, I also didn't have a cell phone.

one of my parish members got home because she had a cell and kept calling her husband who coincidentally ran the snow plows for the county. She took the roads that he had just plowed back open.

Diane, what a wonderful, wonderful story... So deeply true. Thank you.

Wow! What a great story. I love how you wrap the concepts of repentance into a story.

Can't wait for the book!

ditto to all the earlier comments. love it!