Sermon for Easter 4: The Gift of Community

May the words of my mouth and the meditations of our hearts be acceptable in your sight O Lord, our rock and our redeemer.  Amen.

Back when I was living in Japan, my parents came to visit me. They spent three weeks with me, sightseeing and traveling around.
We also toured the school where I taught and we met some people who gave them an idea of the mission of the Japanese Lutheran Churches.
I remember one day they met a man who wove hand-made baskets for a living.
What I remember about him was that he made these beautiful handmade baskets (My parents bought one – or maybe he gave them one), that he was disabled, and that he had a Christian testimony that he shared with them.
If I remember right (and it has been many years now) someone gave him a Bible.
He started reading the Bible, and he believed in Jesus and became a Christian just because of what he read.
That was amazing to me.
Much as I believe that the Word of God has power, it is amazing that he came to Christ just by sitting in his room and reading it .
He also said that for many years he had no way to get to church and didn’t know of any churches, so on Sundays he would read the Bible and pray in his house.

That is a particular vision of what it means to be a Christian.
It is about our individual relationship with Christ.
It is about our own private devotion to Jesus.
But it is not the vision that we have in Acts 2.  In this reading – which follows directly after Pentecost – one of the basic elements of being a Christian is being together.
And it is being a community in simple, but very particular ways.  They are:  devotion to the apostles teaching, to the community, to their shared meals, and to their prayers.
The church that formed on Pentecost found these the basic building blocks, the foundation, of their lives.  And it was a life together.

So on Pentecost  the Spirit descended on the disciples who were gathered.
They spoke about God’s love and mighty acts in many languages.  Peter preached a powerful sermon.
And on that day 3,000 people were baptized.  3,000!
So when I talk about Christian community as authentic community, please know that I am not necessarily talking about a small group.
But it is a group that sees devotion to Jesus as being about devotion to one another.
The community was one of true caring, learning and growing in Christ together, sharing their lives with one another, sharing meals – including Holy Communion – with one another –
and praying with – and for – each other.
This community was not about ‘friendliness’ --- but about real friendship.
And one of the ways I see this manifested at Grace is in the fact that it is not just me that is willing to go and visit shut-ins and go to the hospital, but that we have a small group of visitors here who also go out with communion, with prayers and with friendship to visit.
One woman said this, after visitors from her congregation came to visit, “I wasn’t able to come to church, so the church came to me!”

In our Sunday morning class, we’ve been studying the Apostles Creed.
Last week we talked about the church.
We might hear the word ‘church’ and immediately think about a building – this building – what a ‘church’ looks like to us.
But the word ‘church’ in Greek – the word is ‘ekklesia’ – really means a gathered people.
It is the people who have been called out and who have been gathered together.
It is the people who have heard their shepherd’s voice and who have been called together in community
– to devote themselves to teaching, to share each other’s lives in deep commitment, to break bread together, and to pray – to experience the presence of God – and to share that with one another.
They are called out and they are called together, to share the mission of God, to share the love of God.

And there are two things that happen when we practice community – the first is that we become more generous. 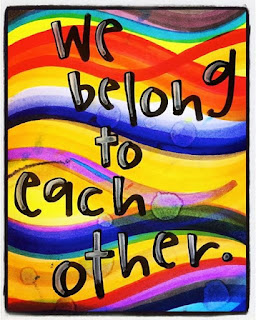 Because we see that we belong to one another, and this is our community and we want to pool our resources so that we can do more things together.
We become generous with our time, and our gifts and our resources, so that everyone here – and people who are around us – can experience God’s generosity – God’s abundance.

The second thing that happens is that we grow.  It’s true.  The early church grew.  The community was contagious.  People wanted to be a part of it.

Where have you experienced true community?  At Grace?  Somewhere else?
How has it changed your life?
How has this community been a gift to you?
(write on an index card anonymously and put them in  the offering basket)
The man my parents and I met in Japan – the one who became a Christian all alone by reading the Bible –his story has stuck with me in part I think because it seemed so unusual.
I can’t imagine coming to faith without people – witnesses – surrounding me, showing me the love of God, making those Bible stories real in my life.
But that’s what happened to him.
But of course, that’s not the end of his story.  When we met him, he was no longer alone.
No, somehow a group of Christians found him – Lutherans from a place called Kosa Church.
They had a ministry to people who were disabled, and somehow they found him and invited him to come to church and worship with them.
They even offered to pick him up.
Of course he was eager to go and worship and study and pray with other Christians.
He became a member of Kosa Church – he was baptized there (even though he believed in Jesus he had never been baptized.)
The church often shared meals after worship on Sunday, and, just like that New Testament Church, they prayed together.
He met the woman who would become his wife.
He continued to make his bamboo baskets, and he gave much of the proceeds of his work to the mission of his congregation.
He wanted people just like him to know the love of Jesus and not be alone.