I went to visit my dad yesterday, at the nursing home.

I was trying to get there about mid-morning.  My mom has said that he is better in the mornings, or later in the afternoon.  But then I needed to proof-read the Sunday bulletins, and make a couple of phone calls, and try to make a couple of appointments with homebound members, and help find a microphone for the people who will be using the fellowship hall today.  So I got there just before lunchtime.

These days, I don't always recognize him for a minute when I first walk in.  He was sitting in his latest wheelchair, which is huge and can be used for reclining.  He used to have these lah-di-dah motorized wheelchairs, but he doesn't need them any more.  Now, it's the comfort that matters.

I looked at this old man in his wheelchair, sitting at the head of one of the tables, and for a minute I stared at him and thought, "Is that my dad?  He looks so old."  But as I got closer I knew that it was him.  They had cut his hair recently, and it looked nice.  But he didn't have that nice wave in his hair any more, like when he was young.

I moved toward his table, and one of the aides volunteered to move him to another table, so that I could sit next to him.  "He's a feeder," they said.  "Do you want to feed him?"  I said that I would.

I sat down next to him, and spoke into his ear.  He tried to talk, and mostly stuttered, but he grabbed my hand.  His hand was warm.  In a little while, the food came:  egg bake and red jello, carrots and peas, mandarin orange salad.  I put a little jello up to his mouth, and waited for him to eat it.

Meanwhile, a social worker from hospice stopped by.  They are just starting to come and visit my dad, and I was glad to meet her.  She stayed and asked me some questions.  Since I was feeding my dad jello, I remembered how we all used to go out on Sunday after church to the Forum cafeteria downtown.  It was just an ordinary cafeteria in some ways, but it had this awesome art deco architecture.  It was a great building.  And they had every color of jello at the Forum cafeteria.

I got my dad to eat a little of the egg bake too.  I could tell he was getting sleepy, but he ate most of the egg bake, and some of the jello.  I thought about how he used to make us toast in the morning (he was not really a cook); sometimes he would put the peanut butter on the toast and forget and start to eat it himself.  And we would shout, "Dad!  That's our toast!"

The social worker asked me this question, "Did he used to be a sweet man?"  I know what she meant, but it startled me.  Suddenly I got this urge to find pictures for her, pictures of the dad I knew.  I took out my iPad and found two very very old pictures, taken when I was a baby.  I particularly wanted her to see the wave he used to have in his hair. 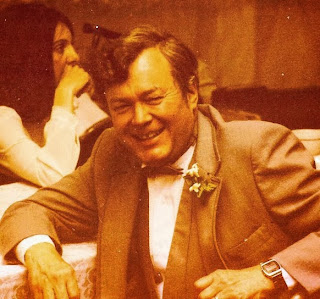 The picture I really wanted her to see was not so old, and was taken at my sister's wedding, many years ago.  I like my dad's crinkly smile in that picture. He looks so happy.

Yes.  He was a sweet man.  Maybe he was a little too tender-hearted sometimes.  I think he let my mom be the "bad cop" more than she really wanted to be.  But he had a sentimental streak a mile wide.  He really thought that love conquered all.  His favorite movie was Pollyanna.  He liked dogs.  Our cat:  not so much.

He enjoyed tinkering with radios and fixing televisions.  He enjoyed talking to people.  He wasn't that ambitious.  The most important thing to him was that he took care of us.

what a great photo, it captures all you've shared of him and then some!