Wednesday was our first "Service Project Night" For confirmation this year.  I had proposed a couple of weeks ago, that our two seventh grade groups (one group of girls and one of boys) have a scavanger hunt for our local food shelf, VEAP (Volunteers Enlisted to Assist People.)    What this means is that the young people would go door to door, collecting canned and boxed goods for those who had some to spare, and at the end of the evening, we would see what we had collected, and which group had gotten the most.

Just to make it fun, we say that each group should try to get one food group for each letter of the alphabet.

I'll be honest:  I had been feeling poorly all day, and I wasn't in top form for Service Project Night.  But it was a beautiful evening, and I was starting to feel a little better by the time the boys all arrived.  One of the girls had thrown down the gauntlet:  "I bet you won't be able to collect as much as we will!"  So the boys were raring to go, all talking about how they were going to show those girls, even though the girls had the advantage with their "puppy dog eyes".

I decided that it would be fun to get Scout involved in the project, so we stopped first at my house to get Scout and some bags for collecting.  She followed us up and down the street, sniffing the grass, straining to see who was at the door, occasionally getting to meet another dog, or a small child who would pet her.

We made sure to stop in at one house where I knew the couple were advocates for VEAP.  I heard the woman say to the boys, "We go to that church!".  She told them she didn't have any extra canned goods but she gave them $20.

Scout had a good time with this family's dog, a friendly golden retriever.  They circled and sniffed.

So, laden down with many groceries, we returned Scout to our house, and drove back to church.  My husband said that, after we left, Scout went from window to window for several minutes, looking for us, excited and hopeful. 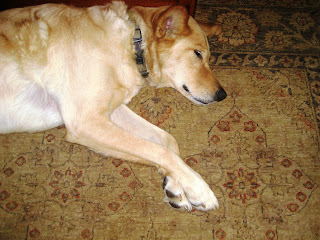 And, by the way, the boys got the most groceries, but the girls actually followed the directions, getting a food item from A to Z.
Posted by Diane M. Roth at 6:56 PM