So, we are in the Big, Lah-Di-Dah city in the South, visiting family and staying at a nice hotel and sightseeing.  And eating.  There is eating involved.
Last night we stopped to see the house of the family member we went to visit.  It's a nice place, we decided.  (Which is to say, we approved.)  He wanted to take us to a fun place for dinner, something that would give us a taste of the  unique "foodie" atmosphere in the city where he lives.  (Have you ever heard of a "gastro-pub?  I hadn't.)

He settled on a place called "Young Augustine's."  On the way over, my husband and I had fun imagining just what sort of place a joint called "Young Augustine's could be.  Because we are both theologically trained, we made a few cracks about St. Augustine, (you know, of City of God fame), and mentioned his prayer, "Lord, give me chastity, but not yet."  We also mentioned about Augustine's mother, Monica (that she prayed for him), I think in part just to show how smart we were.  We were pretty sure that the restaurant wasn't named after THAT Augustine, though.

It turns out, the restaurant WAS named after that Augustine, as the picture on the side of the restaurant clearly showed, as well as the quotation at the bottom of the menu, "Lord, give me chastity and temperance, but not just yet."

I told said family member (the one we were visiting) that we were having a Theological Experience.

He smiled.  I am known for saying these things, and for suspecting that God is in gastro-pubs, where young Augustines are eating and drinking, and know more than I give them credit for. 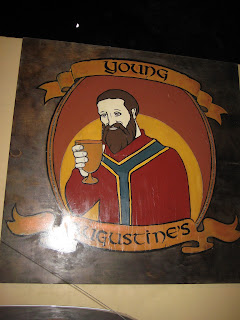 well, it sounds like you had fun! I hope the food was good, too.

My Peace Of Food said...

and tonight we were at a joint called "Six Feet Under" (across from a cemetery.) Seafood.

Terri -- a small but impressive menu. I had "Tempura fish and chips."

All these restaurants sound so interesting! Visiting and eating is always fun. Thanks for telling us about your trip.

Wow1 What fun! (Temperance is overrated.)

This trip sounds like a great adventure, restaurant-wise anyway.