Being Here, Not There

On Saturday, I met one of my cousins for lunch.  She has lived in this state for most of her adult life.  I have lived her for about one and a half months.  We've been meaning to get together, but even though we are in the same state now, and even in the same urban area, it takes some coordination to get together.

Her father and my father were brothers.  My dad was the youngest, the baby, they called him.  Her dad became a pastor.  My father looked up to his big brother, and was always very active in church, at least in part due to his brother's example.

I've only seen my cousin a handful of times in these last several years.  But we're family, and we had wonderful conversation and catching up.  In between stories of family and her work as a school counselor, we shared some theological convictions and differences with grace and good perspective.  ("Are you Calvinist or Arminian?" she asked.  There just aren't that many times that question has come up in conversation.)

I felt blessed to be here, to be able to get to know my cousin a little better in this place new to me.

Afterwards I found the local Christian bookstore.  I was searching for just the right gift for a young man from my church who would be confirmed the next day.  I was inwardly congratulating myself for not getting lost while I was standing in the checkout line with my items.

Somehow the location of my home state came up.  The clerk said that her aunt and uncle were from there.  I asked where.  It was my town.  For some reason (perhaps because I was in a Christian bookstore), I suddenly asked which church they went to.  She described the church.

It was my church:  the church I had served for seventeen years.  I knew her cousins.  I confirmed both of her cousin's daughters.  Her cousin's wife was my children's ministry coordinator, had worked with me on the contemporary worship service.

Suddenly, my heart was filled with so many competing emotions:  surprise and joy, grief and homesickness, so many other things.  I was remembering the beginning of my ministry at that other congregation, with relationships and dreams and planning just beginning.  And I was thinking about the beginning of ministry in this new place, wanting to be there for a new family, to be present and walk with them and dream with them now.

I was here, not there:  sitting across the table from my cousin, buying a tie for a confirmation student, praying for him -- not from a distance, but right there behind him in church, with his whole family. 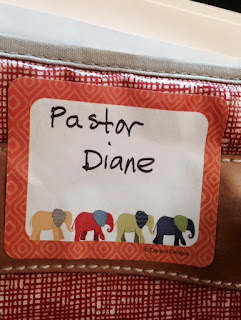 A long time ago I lived in Japan.  I was twenty-five years old, seeking adventure, wanting to follow Jesus and love people.  It turned out that the particular people that God wanted me to love were far away from other people that I loved.  I went and I learned some Japanese and I knelt down to talk to children and I ate with chopsticks.  I learned new places and directions:  to take the train, to take my shoes off, to read, to listen.

And every once in awhile it occurred to me:  I am here, not there.

This morning I got up early and went to the pre-school to greet the children there.  It was the first day of school.  And at first it felt awkward, and I wasn't sure what to do.  But after awhile I realized that it was all right just to be there today, to say hello, to help make a few name tags:  to be there.

At all times one of the tasks is simply to be present, to be fully where you are.  It's not as easy as it looks.
Posted by Diane M. Roth at 7:32 PM