It's a quiet evening at home.  I'm sitting in the bedroom, reading and thinking and relaxing.  I can hear the television in the living room.  It's a re-run of the old show, "The King of Queens".  I recognize the plot.  It's a flashback episode, the one where Doug and Carrie are recalling their engagement and the days leading up to their wedding. 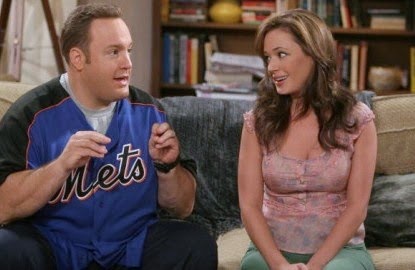 In the episode, Carrie says "yes" to Doug, of course, but now she is having fits of anxiety so severe that they make her literally sick to her stomach.  She loves Doug, but she is plagued by doubts, until they visit the priest, and he remembers that Doug and Carrie met once when they were children at summer camp.  They were on a hay ride together, the priest recalls, and Doug fell on top of Carrie (or did Carrie fall on top of Doug?  I don't quite remember).

All of a sudden, Carrie is calm and relaxed, no longer anxious and sick.  The story of their accidental childhood meeting is proof that they were "meant to be".

Now I'm thinking back to the very last of our summer outdoor worship services, called "Picnic Church."  It seems so long ago now, but it really was only a couple of weeks ago that we held our last Wednesday evening service on the lawn, complete with hot dogs.

It was a lovely summer night, as all of our Wednesday were this summer.  Not one rained-out-Wednesday for our summer experiment.  It was a great end to the summer.  Even though we had a different guitarist for our last two Wednesdays, our substitute's name was Jesus.  You can't do any better than Jesus for a substitute guitarist.  And he taught us the chorus to a great song, "Montana."  We all danced on the lawn.

My message that evening was all about God-sightings.  I talked about learning to see God in our lives, and to tell about it, and asked people if they had seen God around lately.  We had asked the same question the week before, and there was this uncomfortable pause.

"Have you seen God around anywhere lately?"

No one said anything.

It is hard to argue with that, especially in this neck of the woods.  It does seem like a minor miracle for every single Wednesday evening this summer to be sunny.  It must have been a sign from God, a sign that God had blessed our summer plans to reach out beyond our doors.

It was meant to be.

Signs from God are tricky things, though.

I can hear the TV in the background again, the return of the episode from The King of Queens.

As it turns out, the story about Doug and Carrie meeting when they were children:  it wasn't true.  It was actually Doug's cousin Danny that Carrie had met at summer camp.  Doug knew it, but he was afraid to tell Carrie that there was no sign from God.  It was just him, only Doug, loving her, asking her to marry him.  That was the sign.

Signs from God are tricky things.  A sunny day, a chance meeting, a memory of dancing on the lawn:  they are all good things, for which we should rejoice and give thanks.  It was meant to be.  God is working through this sun, this dance, this meeting.

But then, what does the rain mean?  What do the tears, the two left feet, the failures and the missed opportunities mean?  That it was not meant to be?

Signs from God are tricky things.

Even when it rains, even when there are mosquitos, even when you have two skinned knees because dancing on the lawn didn't go the way you planned:

It was meant to be.  You were meant to dance, to share your food, to be merciful.  For better or for worse, for richer for poorer, in sickness and in health.