Walking Down the Street By a River on New Years' Eve

It was early in the evening still.  Later on, there would be loud bands playing music, and vendors selling food, and the street would be one big New Year's Eve party.  But the darkness was still gathering, and the vendors were just starting to set up, and we were walking down the street.

We were looking for a place to have a little dessert, that's all.  We don't do big new years' celebrations any more.  So we walked up and down the street in the darkness, peered into restaurant and closed shop windows, and listened.  The big bands would not start for awhile, but there was still music.

We walked down the cobblestone streets, all the way up and all the way back.  There was an unaccompanied soloist, singing hits from the 50s in perfect pitch.  "Darling, darling, stand by me," he sang out.  "I'd like to buy him a band, just for an hour," my husband said.  Still, we admired his guts.  A little later on, we came across a guitarist, accompanying himself.  He was singing "What a wonderful world", in the style of Louis Armstrong.  Then we thought, he's the best one, so far, which was no small feat.  We walked on a little farther, noticing the partiers with their plastic cups and party hats starting to appear.

I stopped into one open shop.  They were selling incense and peasant shirts.  They admired my homemade scarf.

We rode the elevator up to a restaurant where they were serving an elegant five course dinner.  A woman was singing Jazz.  We just wanted dessert, so we rode back down.  But we did stop for a moment, just to listen.

We walked back up the street, where a trumpeter stood, playing bright snatches of melodies.  We recognized a little bit of the "Bonanza" theme.  People clapped.  He seemed to be in love with his own sound, the echoing reverberation of it.  And then we finally found the place where we could have a little New Years' dessert.

And music.  There were two young women playing guitar and singing harmony.  "While My Guitar Gently Weeps", they sang. 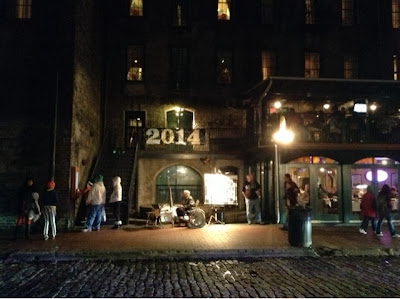 We just sat there, for a little while, when we were done eating cocoanut cream pie and peach cobbler.  It was the music.

It has always been the music.